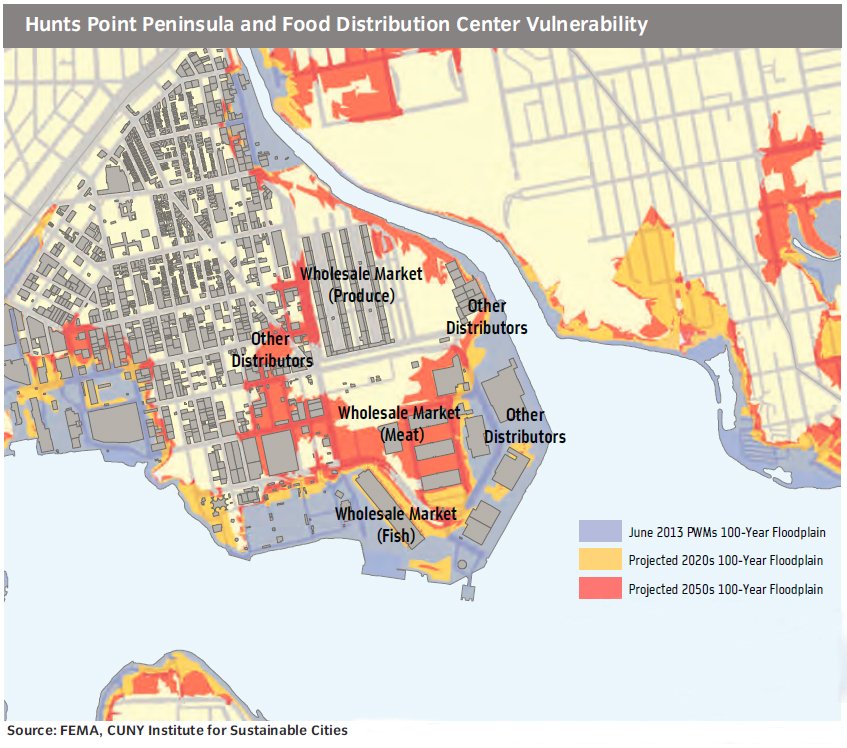 FEMA created three Preliminary Work Maps (PWMs) to illustrate the areas of Hunts Point that are endangered by flooding. FEMA splits the flooding into three 100-year floodplains; over the next 100 years from the start of the projections, there is a one percent or greater chance that flooding will occur. The risk to Hunts Point increases with time; by 2050, flooding could reach deep into the peninsula. Hotspot illustration by Pat Donachie. Map modified from original from NYC report, A Stronger, More Resilient New York

Jenny Eduardo, the co-manager of the famous Hunts Point bakery Il Forno, sat in her office, one floor above all the baking machinery, and recalled the anxious evening of Oct. 29, 2012, when Hurricane Sandy made landfall in New York City.

“The water was literally at our door,” she said.

Hunts Point was spared the worst of Hurricane Sandy’s wrath. The storm hit the city during low tide in the Long Island Sound, which left the South Bronx relatively undamaged. If the storm had hit only a few hours earlier during high tide, floodwater would have reached further inland, threatening businesses, homes and the food markets. Millions of New Yorkers and 23,000 restaurants could have lost access to food, residents could have been threatened with the release of hazardous chemicals, and repairs could have been in the billions. Finally, 12,000 jobs lie in the path of potential flooding, jobs which could have been lost forever. Community organizations and advocates worry that they may not be so lucky during the next superstorm, and are striving to be prepared.

While no one is certain about the damage that the next Sandy could cause, city and federal government officials and independent organizations have measured the potential impact a high-tide hurricane could have on Hunts Point.

Approximately 93 of the 329 acres in Hunts Point could flood in another superstorm, according to the Federal Emergency Management Agency’s 2013 100-year flood plan (meaning that the area in question faces a one percent or greater chance of flooding each year for the next hundred years). According to this projection, the New Fulton Fish Market, most shoreline food distributors and the Hunts Point Wastewater Treatment Plant, which is used by 650,000 people, would all be flooded in a high-tide storm.

“If Sandy had struck within a six-hour window of when it did, the food market would have been decimated.”

FEMA’S projected flooding beyond the year 2050 is even more dire; beginning that year, there is a one percent or greater chance that a superstorm would flood both the fish and meat markets, and endanger sections of the produce market, as well.

“Hunts Point is a food supply for up to 22 million people,” said Richard Roark, head of a development team working to protect Hunts Point from hurricanes. “If Sandy had struck within a six-hour window of when it did, the food market would have been decimated.”

Flooding at the wastewater plant could be disastrous for the area. If the plant was to flood, the excess sewage would flow directly through New York’s waterways and conceivably onto the streets of Hunts Point. Even during Sandy, the wastewater plant was forced to take extreme measures to prevent greater disaster. According to a report by Climate Central, the plant discharged over 150 million gallons of sewage directly into the East River after floodwater threatened the site with a dangerous backup.

Hazardous chemicals from local industrial sites also pose a risk in the event of more substantial flooding, according to Juan Camilo Osorio, the director of research at the New York City Environmental Justice Alliance.

“It’s the very nature of neighborhoods like Hunts Point to have heavy industrial use across the street from residential areas,” Osorio said. The proximity could lead to danger in the event of an evacuation. In the aftermath of Sandy, for example, naphthalene, a potential carcinogen, was found in standing water.

“If people need to evacuate and get exposed with water that has naphthalene,” Osorio said, “the potential public health implication is that they will be exposed to this carcinogen.”

Residential buildings aren’t the only areas endangered by the proximity to industrial sites. “Imagine what would happen if these spills happened across the street from the largest food distribution center in the country,” he said.

“Imagine what would happen if these spills happened across the street from the largest food distribution center in the country.”

Community organizations have teamed with design corporations, as well as government representatives, to protect Hunts Point from harm in the event of another hurricane. One of these organizations is The Point, a non-profit dedicated to Hunts Point’s cultural and economic development. Along with PennDesign and OLIN, two design corporations, and other community groups, they developed “Hunts Point Lifelines,” a catalog of the necessary repairs and construction needed to safeguard the peninsula from a future storm. The entire plan would cost approximately $451 million, and would include levee construction along the waterfront, cleanways to dispose of hazardous materials and chemicals, and increased local production of green infrastructure and training in disaster prevention. To date, $45 million has been allocated from city and federal sources to safeguard Hunts Point from future hurricanes.

During a ceremony at The Point in late April, the de Blasio administration unveiled “OneNYC”, the citywide development plan. The 332-page proposal details the mayor’s plans to improve equity in the city, as well as to ensure that the city can withstand future disasters. The proposal included plans to reduce waste by 90 percent by 2030 and safeguard all coastal areas from storm surges by 2050.

The construction is necessary because the original projections of how a superstorm would impact New York drastically undersold the effect that Sandy actually had. According to the city’s 2013 report “A Stronger, More Resilient New York,” the flooding from Sandy exceeded the government’s original flood projections by over 50 percent. In Brooklyn and Queens, the area flooded was over twice the size of what was originally estimated. The current projections of Hunts Point’s vulnerability may be accurate, but it could also be another overly conservative estimate.

This uncertainty leaves local business managers like Jenny Eduardo, the bakery manager, concerned for their stability and wary of future storms. Eduardo said that her hope was that the food market’s importance to the rest of New York could spur quicker action from city, state and federal governments to protect the neighborhood from the next storm.

“It would just cause complete chaos if you could not get food,” Eduardo said. “What are you going to do without the food from Hunts Point?”